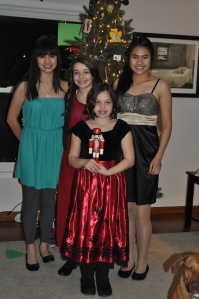 Here are the four beautiful girls Dave and I took to The Nutcracker in downtown Chicago (with the Joliffe Ballet–woohoo!) last Friday. It was a much-anticipated event, and it did not disappoint. Best part for Dave and me: watching the girls’ faces as they watched the ballet! The boys spent the night with friends–which they said was the better deal!

Just past 7 on Christmas morning Jake came into our bedroom—we’d said the digital clock could not have a 6 at the front—to announce that he, Patrick, and Maddie were awake.

As Dave and I sloshed mouthwash, Jake chattered, mostly about presents. Then, in the middle of his ramble, he announced, ““Christmas and Easter are the BEST! They’re God’s plan of redemption.”

Well put and true, though we still laughed at the way he said it.

It is now two days after Christmas, our celebration of the Savior’s birth. We anticipated Christmas through Advent, and then we will expect Good Friday and Easter through Lent. As Jake said: The whole picture of God’s capital-R Redemptive Plan.

Advent means “the arrival of a notable person, thing, or event.” Lent is a “season of penitence and fasting in preparation for Easter.” The only reason we are able to anticipate or prepare is because we know the outcome. We know the full scope of the story. So even our Lent preparation is tinged with hope, with expectancy of joy at the end.

But the Redemption begun at Christmas, finished on Good Friday, confirmed at Easter, still has a final chapter. This final chapter will end all tears, all injustice, all war. It will dethrone evil and establish God as the visible King of Kings and Christ as the Prince of Peace.

It will make us individually and collectively right and unbroken.

But this second Advent, second arrival, has not yet happened.

We still wait for it.

It is a waiting sustained by a sure hope, but this is often hard to remember.

For though the hope is certain, we know very little about the details. How could all that we see in the world around us, in our very lives—how could we ourselves, broken and flawed as we are—be part of this final Redemption?

Paul calls it “seeing through a glass, darkly.”

We are in many ways like the people of Israel during the first Advent, unable to see that the promises of old were about to unfold in tiny little Bethlehem—unable to see that Roman occupation, a travel edict, a young girl, a loving, faithful carpenter—and a slew of other details and people we know nothing of—could be used to usher in the Incarnation.

Perhaps the details of our lives are such that we, too, wonder if we are of any purpose in the Majestic Plan. Perhaps we, too, have tried to silence our soul-whispers of grand desire and settled for “the best we can make of life.” Perhaps we are going through heartache that makes us moan and cry out “Why?”

That is the reality of our earth-life. Uncertain at best, wailing at worst—waiting, waiting—because there must, must be more.

We must cling to the promise that there is. That the Promise Himself will return and shed light on this world so that the purposes of all that went before will be revealed. We will be amazed at how all of our lives, even the smallest details, was being used in God’s Plan.

Let’s not be like the sleepers in Bethlehem. As Christ was born yards from their beds, they slumbered and then woke the next morning with no difference in perspective.

They missed the Miracle.

If we fail to cling to God’s sovereign goodness (such a beautiful mystery—that in God “sovereign” and “goodness” are inseparably linked), we, too, will miss miracles, particularly the everyday ones of relationship and personal growth. We will lose sight of Purpose.

Anna and Simeon waited for years for the first Advent. There must have been times when they felt they waited in vain, when it was lonely and painful and hard.

But at the end of it, the Purpose they held in their arms shed light on the purposes of every one of their past moments.

So in this long period of the second Advent, let us wait and endure with the understanding that God’s Plan incorporates even our heartache, even our daily grind. Though we are in the dark involving the purposes, He is not.

For now we see through a glass, darkly; but then face to face: now I know in part; but then shall I know even as also I am known. I Corinthians 13:12, KJV

Glory and Goodness: a sure hope.