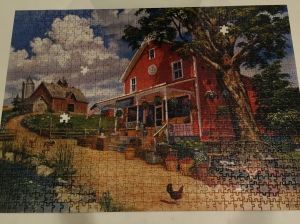 +I have a piece (unpublished here or anywhere else) up today on the Mudroom Blog (a place for the stories emerging in the midst of the mess). It’s titled “The Missing Pieces.” Below is an excerpt from the middle of the piece. Follow the link above to read the entire piece.

I sometimes aim for “tidy and orderly.” But after I get a little ways down that road to craziness/denial/anger/hypocrisy, I realize my missing pieces are actually a gift. They’re good. They check my tendencies toward sterility. They bring me back to need and the deep, true longings of my soul.

They bring me back to Jesus.

+World Relief (WR) is an organization that ministers to refugees around the world. I volunteer at local WR ESL classes. These classes are in jeopardy because the state of Illinois has not passed a budget for the state year that began July 1, so the funds that are meant to provide for ESL classes are not released. PLEASE visit the World Relief advocacy page to read more about this and advocate for this very important ministry.

+Refuge for Women ministers to women who have left the adult entertainment industry. The first R for W recovery home was opened in Kentucky, and now funds are being raised for a R for W home here in the Chicagoland area (it’s desperately needed). R for W Chicago is hosting Shoelapalooza, a fundraising event, this Saturday from 1-3 in Crystal Lake, IL. The slogan is “Step into a new pair of shoes and help a woman step into freedom.” You can also learn more about R for W Chicago at the event. Prices are reasonable and every dollar spent goes to Refuge.

+Willow Creek is hosting its quarterly Anti-Trafficking Forum, and the speaker is Chris Baker of Ink 180. If you’re interested in hearing more about the incredible work Chris does and more about anti-trafficking work being done in this area, follow the link above to learn more about the event. 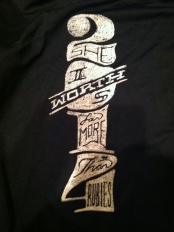 The back of Dave’s Refuge for Women shirt.

He did it! On Sunday, October 12, my husband, Dave, ran his sixth marathon (second time in Chicago), this one for women rescued from sex trafficking. His “Run for a Reason” shirt arrived too late (and too small) for him to actually wear it during the run, but his efforts still raised money for a safe house here in the western suburbs. A big thanks to all you who supported Refuge for Women, and, for those of you who still might like to contribute, visit this post I wrote last month to read more about the organization, its partnership with local ministry New Name, and Dave’s reasons for running for this particular purpose. 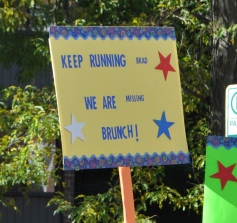 It was an awesome day–especially for us spectators
who were not slogging out 26.2 miles! We enjoyed funny signs, were inspired by courageous people (like the blind runner–also on crutches–we saw at mile four, far behind the others), and loved, loved, loved seeing runners’ faces light up when we hollered out their names and reminded them that, yes, they really could do it.

All seven of us went down to cheer Dave on (plus Em’s friend Abby), and we 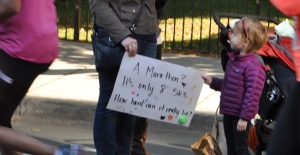 were joined by my friend Beth (who just ran a marathon last week herself) and her two kids. They were cheering on husband/dad Geof, who was running his first marathon on
Sunday. Dave and Geof ran the whole thing together (well, they lost each other in the last two miles, but that’s close enough), and 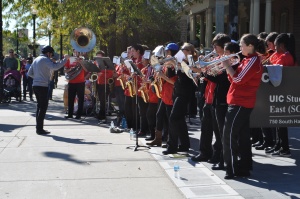 we managed to see them at mile 11 and then again at 17. We tried to see them at 26, but the crowds of spectators were too packed. So we met them just after the finish, watched their drawn, sweat-crusted faces light up when they saw us, and told them we were very, very proud of them.

If you’re in the Chicago area, and you’ve 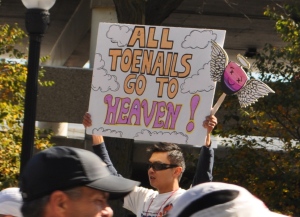 never watched the marathon, DO IT! It’s a great day, filled with chances to cheer on strangers and talk to fellow spectators and walk down streets that are actually empty (Patrick absolutely loved this!). You get to spend the entire day wandering around downtown without a bit of pressure to shop (sorry to all my shopaholic friends).

Other highlights: the band at UIC, the crazy

outfits worn by some runners (it wasn’t that hot, but still, the full-length character outfits had to be toasty), getting ice cream, playing in the park, congratulating exhausted finishers who hadn’t yet met up with friends or family, and, most of all, going home all together after a wonderful, wonderful day! 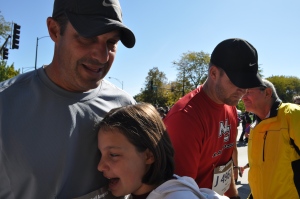 At mile 17, the guys got hugs from the kids. 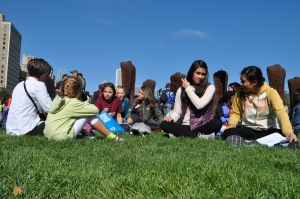 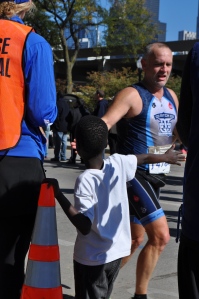 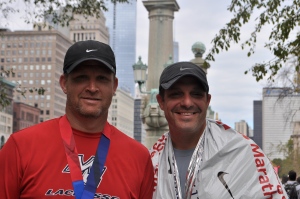 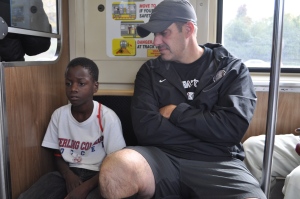 Going home on the el–not sure which one looks more tired!

In four weeks, on October 12, my husband, Dave, will run the Chicago Marathon as a Run for a Reason participant.

His reason? To raise funds for a Refuge for Women safe house to be opened in the western suburbs.

What’s that? Refuge for Women, based in Kentucky, is an after-care home for women rescued from the sex trade industry, and it works with New Name, a ministry right here in the western suburbs that reaches out to women—right here in the western suburbs—who are trapped in the sex trade. New Name sends teams of women into strip clubs, massage parlors, and adult bars to form relationships with the women working or trapped in them; it also has a call center that contacts women—and even pimps—and offers to pray for them; and it bathes everything in prayer with both weekly meetings and teams that pray during the visitation and call center hours.

How did Dave find out about Refuge for Women? This is a long story that actually starts with me. I could skip it and cut to the chase, but I am always amazed at how God interweaves our stories and connects us with others, and then we can look back and see His hand in all of it.

So I’m telling the long version.

Two years ago Moody Radio kept running a promo bit on The White Umbrella, a book about the booming sex trade industry in Atlanta, Georgia, and an after-care home there named Wellspring Living. I read the book and thought, “I have to do something, but what?” Everything in the book was focused on the problem in Atlanta, but when I researched the issue in Chicago, I found it was alive and rampant here as well. I contacted the publisher (Moody) and said, “What do I do?” An editor at Moody invited me to a symposium Moody was hosting on this topic, and I listened to the leader of the Salvation Army’s Promise program (Partnership to Rescue Our Minors from Sexual Exploitation) as he shared how bad the issue is in Chicago and what Promise is doing about it.

I still felt helpless, but one of the messages I kept hearing at the symposium was that people needed to spread the word about this issue. I could blog on it, I thought.

So I did, enough that, a year later, when I joined the Redbud Writers Guild and met with Terri Kraus, one of its leaders, we talked about the topic of human trafficking as something I often wrote on.

“Well,” said Terri, “did you know that I’m one of the co-founders of the West Chicagoland Anti-Trafficking Coalition?”

I didn’t know such a thing even existed, but I began going to meetings and getting involved in a small way, and through the WCATC, I found out about New Name and got connected with Anne, its director.

When Dave wanted someone to speak to his Culture and Theology class last spring about sex trafficking in this area, I contacted Anne, and she agreed to come in.

She blew away any misconceptions the students may have had about women choosing to stay in the lifestyle of prostitution. “Almost all of these girls have horrific backgrounds,” she said, “with the kinds of sexual/physical/emotional abuse that makes you wonder how anyone even thought of it—really evil and horrific.”

One girl, Darcy*, was raped and then trafficked by her own mother. Another girl’s mother is a drug addict who began selling her daughter when she was young to pay for her drugs. Now the girl is trapped in the lifestyle. She doesn’t know any other.

New Name has connections with the Chicago FBI and calls the Bureau when a girl wants to leave the industry or simply is frightened. But the FBI doesn’t provide places for the girls following their rescue, so New Name partnered with Refuge for Women in Kentucky. Four girls rescued by New Name, including Darcy, have now gone to Refuge for Women and been involved in its 12-month, 24/7 program where sobriety, healing from trauma, rebuilding trust, and developing a relationship with Jesus are all essential elements.

Not long after Anne spoke in Dave’s class, I learned that Refuge for Women was raising funds for an after-care home here in the western suburbs, and then I learned it was part of the Run for a Reason program at the Chicago Marathon. When I told Dave, he signed up to be a Refuge runner.

So, my part was to do all the connecting.

Do you want to have a part?

Would you be willing to join us in this effort to bring healing to women?

First, please pray, for the ministries of New Name and Refuge for Women, for the fundraising for a local after-care home, and for Dave as he trains and runs the marathon on October 12.

Second, if you feel led to give to a Refuge for Women safe house in this area, you can do so in a couple of ways:

Attn: Run for a Reason

Thanks so much for reading this. If you have any questions, please feel to leave a comment, and I’ll respond. I’ve also put lots of links in the post, so be sure to follow them to find out more about these ministries.

*I think Anne was already using a pseudonym, but I’m changing it again just to be completely safe.