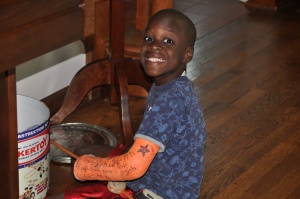 The plan–hatched between PJ and Dad–was for him to pick red–for the Chicago Bulls, of course. But PJ saw the BRIGHT orange and was hooked.
So Dave drew a Bears symbol on instead!

I was lecturing–again. I don’t even remember which child it was, but behind him or her, Dave was signaling “STOP”: running his forefinger cutthroat along his neck; then putting his hands up, palms facing me; finally using the choir director’s sign for “and end.”

I got the hint, finally, and said, “Okay, I’m done.” I looked at the child. “Do you understand? Really?” Dave began the cycle of motions again.

The child left, and my shoulders sagged. “Suggestions?” I asked Dave. “I feel like I say the same things over and over and over.”

Funny how my mouth hasn’t caught up with the lessons my fingers have had to learn.

I used to hate writing word counts. I remember the first time an editor told me a piece had to be drastically reduced in length. There’s no way, I thought. That will ruin it!

It didn’t. In fact, it made it tighter, cleaner. Now I consider word counts a challenge and, eventually–when the cutting is complete, a real blessing to the overall piece.

It’s harder with the words we say, though. With writing, I can let it all out and then cut it before anyone else reads it. We can’t, however, rewind the words we say. Any revision, editing, or cutting has to be done BEFORE they leave our mouths.

“Let your words be few,” Solomon says in Ecclesiastes 5:2. He’s referring to prayer, but I think it’s a good mantra for us whenever we find ourselves with a runaway tongue.

So many sins are related to what we say–and it’s usually because we talk too MUCH, not too little. Sometimes we have diarrhea of the mouth–completely unfiltered and unchecked (this makes me think of the illustration in James 3 of the tongue as a raging fire). Sometimes we are like a dripping faucet, nagging incessantly. Other times we may not be guilty of unkindness with our words, but we certainly can’t be accused of thoughtfulness either. Like a shallow stream our words gush on and on without much substance.

Proverbs 18:4 says, “Wise words are like deep waters; wisdom flows from the wise like a bubbling brook.” This contrasts what Job said about his very talkative friends. “You’re like unseasonable brooks that dry up in hot weather,” he told them.

Our words should come from a well of wisdom dug by the Holy Spirit. They should come forth, not in a gush but in a gentle flow. I get the impression that deep thought has taken place in the well BEFORE there is any output. The result is that the words are refreshing and helpful. Even reproof comes out of this wisdom, and encouragement is its underlying motivation.

Thought before speech; a gentle flow rather than a flood.

In other words, I need to think about my word count in my speech just as I do in my writing.

This makes sense, doesn’t it! How on earth will my children remember a lesson expressed in a torrent of words, no matter how well it is expressed. But simple directives or statements–like the Proverbs–have a better chance of sticking.

Our household rule for words is pretty simple: “If it won’t do good, don’t say it. If it WILL, DO.” I say this rule to my kids often enough that they tend to recite it with me when I start it. Sometimes THEY start it.

It’s a good rule for me to follow too.

Except I need to add “And then STOP!” at the end of it!

A few more verses about words:

In the multitude of words sin is not lacking, But he who restrains his lips is wise. Proverbs 10:19

A word aptly spoken is like apples of gold in settings of silver. Proverbs 25:11

Whoever has no rule over his own spirit is like a city broken down, without walls. Proverbs 25:28

When she speaks, her words are wise, and she gives instructions with kindness. Proverbs 31:26

May the words of my mouth and the meditation of my heart be pleasing in your sight, O LORD, my Rock and my Redeemer. Psalm 19:41

Then Judas and Silas, both being prophets, spoke at length to the believers, encouraging and strengthening their faith. Acts 15:32

Even a fool is counted wise when he holds his peace; When he shuts his lips, he is considered perceptive.  Proverbs 17:28