NOTE: I wrote this journal entry nearly a year and a half ago, but I decided to post it today. (One nice thing about going back through my journal is that I realize that I’m not the only one who has grown. My kids have made progress, too!)

A few days ago Jake and Patrick (PJ) got into it and PJ bit Jake on his butt, hard. When I pulled Jake’s shorts down to check, there was a serious red welt there, and PJ got a long timeout (for which he wailed as if I had beaten him—or bit him myself, I guess). Tonight when the boys got into the tub, the red welt was much smaller. PJ pointed to it and asked me, his face all screwed up the way it does when he asks me a real question (NOT “Why?”—that’s just standard response), “Mosquito?”
“No,” I said. “That’s where you bit Jake.”
“No,” he said. “Mosquito.”
“Not unless you’re the mosquito,” I answered.
And Jake lost it. He thought that was hilarious. “PJ,” he chortled. “You’re a mosquito and this,” he pointed to his butt, “is my mosquito bite.”
So funny.

Maddie did a not-so-funny tonight. She literally wrenched my work flash drive out of its socket, breaking it into several pieces. She came to me with the main piece in hand. “Mommy, you’re not going to like what I did.”
Uh, no.
But the grace of God intervened, and I did not yell or scream or make her cry. I started the “What were you thinking?” and then I stopped. “I don’t get it, Mads, but we’ll talk about this later,” I said and sent her to her room.
Em got on the phone and called Dave (I think she thought I might just lose it after all–she does understand what all might be on a flash drive–and wanted to call in the cavalry just in case or, probably more likely, she wanted to create drama. She is, after all, Emily.)
Dave came home a little later 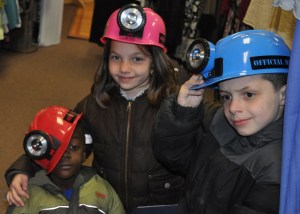 PJ, Maddie, and Jake showing off some "miner" hats

.
And I was calm.
“I think it’s grace,” I said.
He grinned. “I know it is.”
Yeah.
So I went up to find Mads, and I put her on my lap so I could see her little face and told her I loved her, I wasn’t mad at her, I forgave her and the consequence would be that she couldn’t play on the computer for a week. She accepted it all and then she wanted to know what that little stick was anyway. As I explained it to her and told her that there was work on that little “stick” that is nowhere else and Mommy will have to redo it, her face crumpled into silent tears.
Maddie is generally a loud crier and the sobs and screams are generally of the “listen to how miserable I am” sort. Not these. Quiet, slipping-down-the-face tears.
It was another wonderful parenting moment, even more so as I explained to her the grace Jesus gave me so I could give it to her.
Oh, God, You’re good.