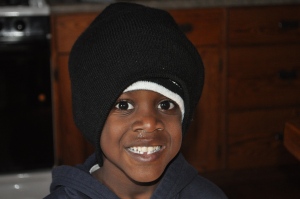 Patrick--with about four hats on. Don't ask me why, particularly since this day was about 60 degrees.

When Emily was about three, I came home from a solitary grocery store trip to find a silent house. Where were she and Dave? I found them in the living room, with Dave stretched out on his stomach on the rug, and Emily peering into one of his ears with her toy otoscope (I may be a doctor’s daughter, but I still had to look that up).

Emily turned a very serious face toward me. “Mommy, Daddy’s sick. I’m taking care of him. He needs lots and lots of rest.”

In the years since, Dave has found oh, so many ways to “play” with our children that involve his getting a nap. It helps that the man can doze through just about anything, and he is all right with getting a kind of pseudo-sleep that never really drops into the real thing. The doctor/nurse scenario has had some real staying power, but he has also been a mountain for climbing (when the twins were really small), a soldier injured in a war (that allows Jake to be a fellow soldier while Maddie nurses), and a dead body that Detectives Jake, Maddie and PJ investigate for clues (I think that one is a bit morbid, but they all like it).

A few months back I finished up the dinner dishes while Dave was upstairs getting the younger three in bed. I joined them when I finished. Dave was in his dead-body position on the boys’ carpeted floor. Maddie was rubbing his back, PJ his head, and Jake was reading his illustrated New Testament aloud to all three of them—with different voices for all the characters.

When Jake turned a page, Dave said, “A little higher up, Mads, and, PJ, right above my ears, please.”

It seemed like a better deal than the dishes, so the other night I decided to try it. Maddie was already asleep, so it was just PJ.

As his little hands moved, butterfly-soft, across my back, he asked me, “Mom, do you have a rope?”

“Yeah, one that’s all twisted up.”

I’ve always thought the injured-soldier/dead-body routine was a bit of a cop-out, but maybe Dave’s been onto something all along.

When you stay quiet long enough, they say—and we learn—wonderful, wonderful things!