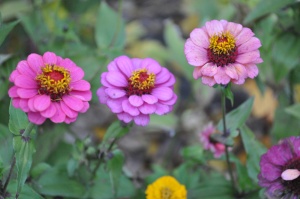 I took this picture last fall, but spring is a'coming! The trees are blossoming, and there are enough shades of green outside right now they could fill a crayon box.

I’ve never thought much about that one word: Amen. It means “so be it,” and that makes sense at the end of prayer, especially prayers of praise—which is where “Amen” is most often found in Scripture. But this week I read two verses that made me want to study it more. The first is Revelation 3:14, which calls Christ THE Amen and also refers to Him as the faithful and true witness.

The second is II Corinthians 1:19-20, which says that Christ “…is always Yes. For all the promises of God find their Yes in him. That is why it is through him that we utter our Amen to God for his glory.”

I get that, at least on an elemental level, knowing that there is far more to it, far more to study. Christ said, “So be it” to the entire will of God. He said, “I seek not my own will, but the will of Him who sent me.” He continually turned people’s attention to the Heavenly Father. He did not seek self glory. And in the garden and on the cross, He uttered the hardest “so be it” of all, the willingness to endure incredible agony so the Father’s will, his eternal, all-encompassing will, would “be”:

-So it would “be” here on earth like it is in heaven—that’s the prayer He taught US to pray.

-So we, too, can utter the Amen, the taking on of God’s will and the letting go of our own. II Cor. 1:20 says we can do that, that through Christ “we utter our Amen to God for his glory.”

That’s an amazing thought: we can contribute to the Father’s will being done on earth as it is in heaven simply by saying “so be it” with our tongues and our lives to HIS glory and not our own.

I write “simply by saying,” though I know there is nothing simple about it. I wrestle with laying down my desire for self-glory every day. I’ve been thinking about it for years and writing about it for months, and I will continue to do so. It’s not a “one and done,” “got that one licked” kind of sin issue. (Are any?) The desire for self glory and self control twists itself into every area of our lives and morphs into a different monster as soon as we recognize it in one form.

But there is great hope in that verse: through Christ we CAN utter the Amen. We can accept, even embrace, ALL as the will of a good God. What was impossible has become possible “through Christ who gives (us) strength.”

I got so excited about this I wrote a poem—okay, I wrote a poem because I was coaxing my sophomores to write poetry, and it seemed only fair that I should, too, but, still, this was the idea I wanted to write one about. It is an idea full of glory and worth the efforts of someone who truly is a poet (which I am not). Still, here is my scribbling on the subject:

The “Amen” chorus of

The Angels and Elders,

First sung by the Son.

“Thy will be done”

And death of “It is finished”

To speak the “So be it” themselves,

And though mine may falter,

In my oxygen-starved cells,

Till my lungs inflate and

That speaks the truth:

Thy will be done,