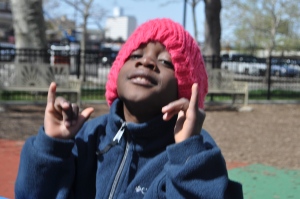 I'm not sure what he was pretending to do, but that's Em's hat PJ is wearing.

I take Chai, our dog, for a “bike run” (I bike, she RUNS) nearly every day that it’s nice. Sometimes the kids join me. When they do, I have three rules for them: 1. Stay on the sidewalk; 2. Don’t panic; and 3. I WILL come back for you. Trust me.

They do really well with rule number one, but they break 2 and 3 nearly every time. Jake lags far behind, and Maddie panics: “Jake, we’re losing you!” Then someone, unable to keep up with me at first because Chai is running off her steam, yells, “Mom, don’t leave us.”

That’s when I circle back around, gather them together and remind them—again—of the rules. I usually end with, “Have I EVER left you?” They shake their heads. “Don’t I know exactly where you are?” They nod.

The other day the Holy Spirit nudged me during my “rule” review. “Oh,” I thought. “I do the same thing to God.”

And as I’ve listened to some of the conversations I’ve had lately with my younger three children, I’ve discovered that MANY of the things I say to them are the very things I know God tells me. I’m a lot like a 7-year-old in the ways I relate to Him. Not only does He have to say the same things I do, but He also has to say them over and over.

So I’ve been trying to take a spiritual lesson from what so often feels mundane and repetitive.

When Maddie asks, “Mom, are you getting me a sandwich(or whatever)?”—for the fourth time—and I answer, “Honey, I’ve told you I will put a sandwich in your lunch for tomorrow, but right now I’m fixing our dinner. I WILL get to it. Can you please stop worrying about it and trust me?”

Today PJ ate lunch with his dad while I met with a student. Dave texted me on our way into school to tell me he was not in his classroom. When PJ headed that direction, I told him, “No, buddy, Daddy’s somewhere else. You’re going to eat in a different place today. Just follow me.”

But that wasn’t good enough. “Where are we going?” he asked.

My explanation didn’t make sense to him, so he asked it again.

“Buddy, you’ll see it when you get there. I can’t explain it to you in a way you’ll understand.”

So he changed tactic. “WHY are we going there? Why aren’t we eating in Daddy’s room?”

Once again I “saw” myself, questioning God’s plan, wondering why it’s different than what I think is best, frustrated when I can’t understand the answers He gives (and thinking that that’s HIS fault, not mine) and then asking “Why?” rather than simply trusting.

I could give lots more examples. This happens just about every day.

It all boils down to their lack of trust,

As it all boils down to MY lack of trust.

“This is what the Sovereign LORD, the Holy One of Israel, says:

‘In repentance and rest is your salvation,
in quietness and trust is your strength,’”