I spotted the beautiful blue and green variegated yarn on the sales table at a local yarn shop a few weeks ago. One hundred percent Andes wool, the loosely wound hank of yarn lay twisted in a figure-eight pattern. I couldn’t resist.

Yesterday, tired and feeling frustrated by writer’s block, I opted to knit rather than walk or work while I hung out at the younger three’s soccer practice. I pulled out the hank of wool, removed the small pieces of yarn tied to keep it in its figure eight, and unwound it into a large loop.

But I still couldn’t knit from it. The wool stuck to itself and tangled.  Every time I pulled, it snarled.

I remembered the last sentences from my devotions that morning: “You inhabit a fallen, disjointed world, where things are constantly unraveling around the edges. Only a vibrant relationship with Me can keep you from being unraveled too” (Sarah Young, Jesus Calling).

I continued unwinding the yarn, thinking about that quote as I formed the end into a tiny wad and wrapped round and round it, rotating the emerging ball so it stayed balanced. Still the hank resisted my efforts. Eventually I hung it around my neck and lifted it one loop at a time as I wound.

I could identify with what Young wrote about unraveling. It has been a consistent prayer during my motherhood/teaching years. Last year, when we first took in two international students and with PJ still home part-time, it progressed at times to a fear. I am coming undone, I would cry, and then I would see, time and again, God holding me together.

But He is unraveling me now. The kids are all in full-day school, and I am not teaching. Though I have writing deadlines, I have large chunks of alone time in which to manage them. I am not frantically rushing from one school to another. I have quiet hours in which I don’t hear “Mom” or “Mrs. Underwood” at all. It is an oddly unsettling feeling. It is strangely lonely.

Late one night last week, Dave prayed—in what I think was Holy-Spirit-guided words—that I would find my value only in Christ.

Sometimes God must do some unraveling to make us see ourselves first and foremost as His. We have our roles set; we are comfortable in them (oddly enough, we CAN get comfortable with frantic schedules and too-long to-do lists!); we find our value in them; we may even brag about them. We have reputations. And God says, “I can’t knit with that hank of wool you have arranged just so. I have a finished product in mind for you, and you will have to be unwound for Me to work with you.”

There are some drastic examples of this in Scripture: Joseph: goodbye, pretty coat and favored-son status; Moses: adios, palace; Esther: hello, palace; Abraham: welcome to the tent of wandering! God unmakes in order to create and fashion and teach.

It took me a long time to wind that ball of yarn, but when I was finished with it, it seemed small—compressed, not as pretty. I wouldn’t have bought it if it had looked like that, I thought.

But its value now is not in how it looks at all.

Its value is that it can be used.

And the end result will be beautiful! 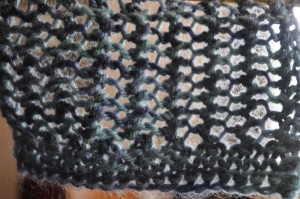 Philippians 1:6 “…I am sure of this, that he who began a good work in you will bring it to completion at the day of Jesus Christ.”

One thought on “the value of a hank”