“You learned it from Epaphras”

My quest to memorize Colossians is slow, slow, slow. But last week I got to that phrase: “You learned it from Epaphras…” 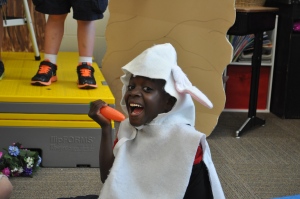 PJ in his bunny costume for last week’s kindergarten Mother’s Day program. You can barely see his sling under the costume. His teacher said, “Good thing he wasn’t a bird! They have to flap their wings!”

and it jumped out at me.

That little pronoun “it” packs a lot in this case. Paul has already praised the Colossians for their faith in Christ, their love for God’s people, the hope they have in their heavenly home, and the fruit the Gospel is bearing in their lives.

Then Paul says this: “You learned (all this) from Epaphras…”

Good job, Epaphras! Scripture tells me very little about you. You’re clearly not a “major player” like Paul. You get less mention than Barnabus or Silas.

But Paul thought highly of you. After “You learned it from Epaphras,” Paul calls you a “dear fellow servant” and “a faithful minister.” He says that you work on the behalf of others—not for glory for yourself. He says you love to brag on the believers at Colossae. You take joy in praising them.

The Colossians learned a lot from you, the kind of learning people don’t get from lectures or sermons. I’m guessing your life was one people could follow, one that “showed” the Gospel, fleshed it out in an imitation of Christ. I’m betting you were pretty approachable, that people felt comfortable talking with you, even ordinary, everyday people.

And Maddie and Jake had Pioneer Day last week, too. Costumes galore!

Epaphras, you remind me of a lot of behind-the-scenes Christ-followers I know. They are doing their darndest to live out their faith—but they’re not front-and-center types, and sometimes they wonder if what they are doing is “doing” any good. They pray more than they speak; they help and follow more than they lead; they may live much of their days and lives in the company of just a few people. They sense that God had called them to exactly what they are doing, but sometimes it just doesn’t seem enough.

The lesson I gain from you, Epaphrus, is this: “Take heart! Don’t get sidetracked. Remember the goal: to ‘teach’ Christ through your lives. God has somebody watching.

And they’re learning Christ from you.”

2 thoughts on “Behind the scenes”