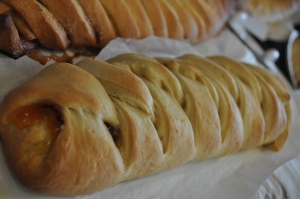 The past three Januarys, I’ve taught a breadmaking class to Wheaton Academy students. This is one of their jelly rolls (not quite Communion bread but perhaps symbolic of the sweetness and goodness of Christ’s sacrifice for us).

Communion during my childhood felt like the bridge challenge my brother and I gave ourselves whenever we were on road trips. We’d see a bridge a little ways ahead, breathe fast in-out, in-out, and then, as soon as the car was out over space rather than earth, try to hold our breath till we made it to the other side. Our faces turned pink with the effort; we stared at each other with wide eyes, daring the other to hold on just a little longer; and we sucked in fresh lungsful of air as soon as we were back on solid ground.

Communion in the churches I attended as a child and teen popped up like those bridges. On rare and random Sundays the silver towers of tiny crackers and grape-juice-filled cups betrayed its inclusion in the service.
And I would hold my breath—because “do not take communion in an unworthy manner” had been presented to me as a flagrant sin, and I was terrified of committing it.
First came the searching for past sins. I began at perhaps a week before and scoured my actions and thoughts up to that present moment. Discover-confess; discover-confess.
Then I held on. My main thought—prayer?—was “Don’t do anything. Please, God, don’t let me commit any new sins. Blank mind, blank mind. Don’t look at anyone.”
I simply had to make it till the two silver trays made their way past and the pastor said, “Do this in remembrance of Me.” Then the wafer was popped in the mouth. Hold it; try to be thankful in that moment—Remember, this is Christ’s sacrifice. A lot of pain went into my forgiveness!—don’t sin, don’t sin —then the juice—and a feeling of guilt at my enjoyment of the sweet taste.
Finally, the release of breath, the feeling that, if I were to sin at that point or thereafter, it wouldn’t be quite as big a deal.
Communion was not celebration; it was ordeal.
Not now.
First, Communion is no longer random—we participate in the Eucharist every Sunday at Church of the Resurrection—and, second, it no longer terrifies me.
This transformation began long before our change in churches. As I began to understand the Gospel more deeply, I understood there is no such thing as being “worthy to take communion,” just as there is no worthiness required or possible to receive salvation. My youthful fear of taking communion lightly actually pushed me into another unworthy way of taking it: as if I could earn it.
Communion at Rez (as attendees affectionately refer to our church) has fleshed this concept out even more. I cannot deny it was a shock to my fundamentally-brought-up soul to see tiny children taking the bread and cup my first Sunday. But week after week, as I watched little ones joyfully bounce up to accept the gifts, something began to resonate within me.
This, this, I wanted to shout one week, is the way to accept it. No pride, no self-awareness, in complete weakness, presenting nothing, simply ACCEPTING.
One Sunday this revelation became even more personal. I was processing a grudge during the sermon, and communion “popped up” for me like an unseen bridge. Suddenly the person next to me stood, and I realized it was our row’s turn to stand and go forward. A bit of the old panic struck. I’d done no preparation at all! How had this crept up on me?
But when I stepped up and the bread was pressed into my open palms, I understood it in yet another new, fresh way! Communion is like a refresher course in the Gospel: God saying, “Remember how helpless you were. Look at what I did to rescue you! You couldn’t prepare for it then. You can’t earn it now. Keep living in that truth! This is what leads to true gratitude and celebration!”
Like the children, I have nothing to offer, nothing to exchange, and I never will. I come forward, again and again, with a confidence that is based solely in Christ.
I simply accept the Gift.

2 thoughts on “Communion: a refresher course in the Gospel”