This is a purposely random post. It includes further thoughts on a recent post; one quote; and one Scripture passage (in three versions) that I found beautiful. 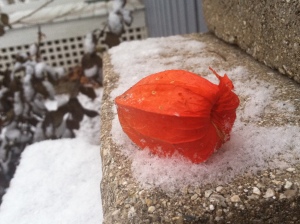 Last weekend, as I was walking just after our first snowfall, I saw this bud lying on the ground. I brought it home, set it in the snow on our patio, and shot a picture. I changed my header picture to this shot because it certainly describes this strange transition of weather we are in. Down to 12 degrees one night, and then five days later it’s back up to 50!

1. A couple days after posting the Meanderings on Being piece, I heard a radio interview with James Bryan Smith about his book The Good and Beautiful God. He shared this wonderful illustration from his book: A 19th century Russian Orthodox priest named John of Kronstadt was terribly bothered by the alcoholics he saw passed out in the gutters on his way to the church where he served. Unlike the other priests, he could not simply walk by them. Compelled by love, John would lift up the “hungover, foul-smelling people from the gutter, cradle them in his arms, and say to them, ‘This is beneath your dignity. You were meant to house the fullness of God.'” When I heard that amazing story, my mind jumped to my thoughts about the “God-blank” I wrote about in the Meanderings piece. Hmmm. “You were meant to house the fullness of God.” Oh, I like that.

2. If you live in the U.S. and used Google today, you saw the funky artwork at the top with a quote in it from Corita Kent. Here’s the quote:

“To understand is to stand under

which is to look up

which is a good way to understand.”

I like that, too. When I read the Google blurb on Kent (1918-1986), I learned she was a nun, a teacher, and an artist known for contrasting the idea of consumerism with spiritual concepts drawn from her religious background. I found one article on her in which a friend described her as “a Boston lady who understands friendship and ‘who quietly waits for the gentle inner voice to whisper’ where it will take her next.” An artist whose friend described her first in terms of FRIENDSHIP–and then referred to her as a thoughtful artist: that’s a good model!

3. Here are the verses: Psalms 16:5-7. I’m pasting it in here in the Amplified version (of course), but the reference link will take you to a Bible Gateway page with the ESV, Amp, and New Living translation side by side. (I love that tool!). This verse, too, informs my “meanderings on being.”

5 The Lord is my chosen and assigned portion, my cup; You hold and maintain my lot.

6 The lines have fallen for me in pleasant places; yes, I have a good heritage.

7 I will bless the Lord, Who has given me counsel; yes, my heart instructs me in the night seasons.