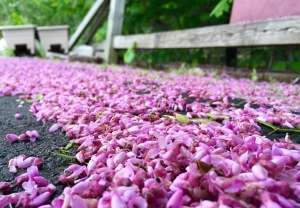 A few years ago, the pastor at the church we were then attending preached through the book of Ruth, and I got fixated on one word.

I studied the word; read commentary on the Biblical passages where it appeared; and talked one of my friend’s ears off about it during our morning walks.

Let me review the context of that word in the story. Naomi, the mother-in-law, has lost her husband and both her grown sons while she is living in a foreign country. She tells her foreign daughters-in-law she is returning to her homeland, Judah, and instructs them to stay in their own country, where she hopes and prays they will each experience rest in the home of a new husband. One daughter-in-law, Ruth, refuses to let Naomi return to Judah alone and joins her. Back in Judah, the two women struggle to survive until Ruth catches the eye and heart of a wealthy landowner named Boaz who “just happens” to be one of Naomi’s relatives. Naomi then tells Ruth, “My daughter, shall I not seek rest or a home for you, that you may prosper?”

Naomi, sure Boaz will say yes, sends Ruth to propose to Boaz, and the two are married, giving both Ruth and Naomi the rest Naomi prayed for.

The commentary I read on “rest” in Ruth focused on either the rest we find in relationship with Christ (because the story is a beautiful picture of the Gospel) or the rest/security God wants husbands and wives to find in marriage.

All beautiful stuff, but somehow it felt incomplete for me, as if there was something more I had to learn.

Yesterday all my wonderings on “rest” came rushing back. I was reading The Healing Presence by Leanne Payne. Chapter 12 discusses the idea that when we are able to truly believe in God as REAL and all He says He is, we are also truly able to live as His creations. We let go of the idea that we can create or figure out our own selves, and we are set free to focus on God and on others—to turn our gaze outward rather than inward. Payne says we are then “free to be.” The phrase that popped into my mind was this: we are free to REST.

One paragraph in particular made me think specifically of Ruth and Naomi:

To be is to experience life firsthand, to live in the present moment. The person who has the disease of introspection, who thinks painfully, constantly, and in circles about life, lives always in the painful past and for the future. In this way, he squanders his present by trying to figure out a more secure or less painful future. The future, of course, never arrives, for it is in the present moment that we “live and move and have our being.” (p. 192)

Rest, I thought, is freedom from what Payne described. Rest is being secure not in the moment/circumstances but in the One who holds the moment and circumstances. This is true rest.

Oddly enough, though Naomi prayed for rest for Ruth, the person who really needed it was Naomi herself. Ruth seemed to be one of those rare people who have the gift of “being/resting” even in painful circumstances. When we read her story, we see evidence that Ruth was at rest even in the pain of her widowhood, even in the pain of living and journeying with a sorrowful, broken Naomi, even in the uncertainty of living as a vulnerable foreigner in a strange land. She lived fully right in her present moment.

Naomi, though, was living in her painful past, as described in Leanne Payne’s paragraph above. She was focused on creating a different future because the present was unbearable. She even changed her name to reflect this. When she returned to Judah, her former friends were shocked by the change in her appearance. “Naomi?” they asked, making sure it was still the same woman they’d known so many years before.

“Don’t call me that,” she said. “Call me Mara.” “Mara” means “bitter.” Who can blame her? She’d lost her husband and both her sons. I cannot even imagine that kind of pain. My heart breaks for Naomi. So much had been taken from her.

But in the midst of her loss, God shone the light on an incredible gift she’d already been given: Ruth.

Ruth helped Naomi walk into rest, into grasping neither the past nor the future but in being in her present time and circumstances. I’m sure Naomi never returned to being the woman she’d been before she lost her husband and sons–she wasn’t meant to–but she was no longer held captive by her sorrow. She was able to rest in the present, experiencing its joys, knowing its gifts, “living, moving, and being” in her timeless Creator.