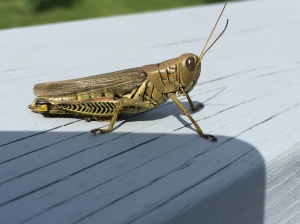 Up close, you get to see incredible beauty.

Someone recently told me about a young member of our military who shared with his mother some of the trauma he’d experienced on deployment. One time he was told to clear a building. He entered a room and discovered a man with a gun. The man moved to shoot, but the soldier was faster, and the man was killed. “We found his wife and children hiding in another room,” the young soldier told his mother.

She saw his distress and tried to reassure him, “Sweetheart, you didn’t want to kill him. It was kill or be killed. You’re not at fault.”
But he didn’t want to debate fault. “Mom, he was just like me. His wife and kids, just like me. They’re not any different.”
I don’t share that story to make any judgment on our armed forces or its members. (I’m not even making a statement on our police forces and their members, other than to say this: all our police need to have the same attitude as that young man; it should rank as a requirement well above a person’s ability to handle a weapon. I’m very thankful for the many police officers who DO have that attitude, who treat people—no matter the color of their skin or their background—with dignity and respect, but we cannot excuse those who do not).
I share that story to make this personal: I need that attitude. I need it with those in my neighborhood who look different than I or parent differently or work different kinds of jobs; I need it with the wealthy moms at my kids’ private school; I need it with the members of my own household.
But I need it, too, with those whose lives or perspectives seem so different as to be polar opposite mine.

I work with an organization that reaches out to women involved in the adult entertainment industry. Some of these women have been trafficked, but not all. The leader of our organization is adamant that we don’t make a distinction. Here’s her point: We know—through both statistics and stories—that the vast majority of the women we reach out to have really good reasons for doing what they do. When we look at their backgrounds, we think, “Yes, I can see why this looks like a viable option to them—or their only option.”
But what if that’s not the issue? What if a woman is simply involved in adult entertainment because she makes more at it than she would at another job? Does that mean I’m allowed to say, “That’s some messed-up, sinful thinking!” and write that woman off?
I don’t think so. In fact, I’m beginning to see that it’s not my right to know why a woman is in the life; it’s her decision to tell me or not, and if she does, it’s not my business to form any sort of judgment based on what she tells me. I can’t even say, “But for the grace of God, that could be me” because that still sets me apart. It makes me different. It implies they didn’t receive grace; that there was some reason I “got grace” and they didn’t. It sets up and subtly reinforces a difference between us.
I need to see and know—deep, deep down—that woman is just like me in all the ways that really matter. I’m human; she’s human. I’m broken and bent by sin; so is she. I need a Savior; she does, too.
When I talk and text with women who are in a life that looks so very different from mine, this is what I want to remember. This is what I want them to know: you and me, we’re alike in all the ways that matter.
I’ve found it interesting that the more I work with the issue of adult entertainment, the less inclined I am to write about it. Every statistic, every story, every generalization is becoming more personal for me. The women our team members talk with, text with, hang out with, pray with, eat with—they’re not statistics; they’re women.
I rarely write in-depth about my family members on this blog, and when I do, I generally don’t use their names. I don’t want them to become an example or a generalization or even simply a character. I want to protect them; I want to maintain their dignity. I want them to own the rights to their own stories.
That’s how I’m beginning to feel—and not just think—about the women I meet who are in the industry. I need to maintain their dignity as people, and they need to tell their own stories.
I’m winding through several points in this blog post to get to a final one: though I don’t write much here on the impact of the adult entertainment industry on women and on our culture or on the issue of racial reconciliation (one that is very personal for my family), that doesn’t mean I don’t care passionately about them. I’ve felt convicted of late that I don’t share this passion enough through my blog. So, even though right now I don’t plan to do more personal writing on these issues, I would like each week or so to share something I’ve encountered about these and/or other issues. The perspectives of the authors/speakers may be very different than mine or yours, but I am praying that as we read and listen, we will be able to let go of our fears of “different”; that we will empathize and step into the shoes of others; that we will be drawn into greater understanding, greater unity, and greater love.