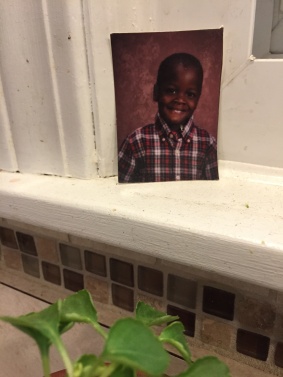 Is lament possible without identification? We white mothers must come to the point of understanding that we cannot say, “This could happen to my son—for no good reason—through no fault of his own—through no action of his own,” and really mean it, BUT nearly every African American mother CAN, and with these words a little surge of real terror spikes in her heart.

That is an example of white privilege.

I know it is, because as a white mother of a black son, I have a hard time really believing those words. Though I know my son’s risk factors are high (he is black, very dark-skinned in fact, and he has pronounced ADHD and high impulsivity), I don’t have the history that makes his danger REAL to me. I don’t have the from-birth distrust of a system, of a majority group that sees me as inferior (though they don’t come right out and say so). My skin doesn’t ripple with a subtle prickle of fear when I see a man in uniform. Even though I am truly “in the shoes” of other African American mothers, my white privilege keeps them loose in the day-to-day. They’re not pinching my every step.

I remember, several years ago, driving through rural Indiana with a Latina friend. As we approached one city-limits sign, I remarked, off-hand, casual, “This is a pretty town, but it was a KKK hotbed until just a few years ago. It’s more hidden now, but it’s still here.”

Her response was immediate, and it wasn’t just emotional. Her breathing quickened; her face went pale, and she was unable to relax until we were miles into the country on the other side. I couldn’t identify, but I “got it.” She’s experienced “difference” her entire life. And I, except for when travelling in Africa (and the “difference” I experienced there brought, for the most part, privilege), have not.

This morning I woke early. We are preparing for a move to one of those very neighborhoods where the other mothers in it live everyday with this fear for their children, where I, too, will experience it more, simply because of location. Because of this upcoming move, our house looks like a picked-over junk shop. It is at the stage when everything formerly “in”—cupboards, closets, drawers—is out, and all knickknacks are off shelves and ledges, revealing hidden dust.

Late last night I moved the verse plaque from the windowsill above my kitchen sink. Behind the plaque I found a picture of my black son taken several years ago when he was in preschool. At some point I’d tucked it behind the plaque and forgotten about it.

This morning, up before anyone else, I read updates on the shootings of Philando Castile and Alton Sterling. I cried. I prayed. Then I went to the sink to fix myself some tea. And there was the smiling face of my beautiful son, like a treasured photo of a lost loved one, placed in a spot where one sees it several times a day.

And for one moment, the shoes tightened, hard, and I remembered the words I’d read just a few minutes earlier in one of the news reports. Philando Castile’s mother, speaking to a group of African Americans mourning the death of her child, told them, “This could be your son.”

If one is truly to grieve, lament, repent, this is what we must understand.