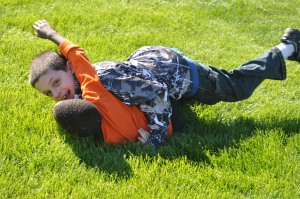 And speaking of fighting/wrestling, here are the two boys doing just that–one of their favorite activities. Once again, it’s at a soccer game!

I may have been standing up with the rest of the congregation, singing along with them, but inside I kicking and fussing. “I can’t believe they left that mess for me to clean up. Don’t they realize…” My hands clenched the back of the seat in front of me. It had been a month of what felt like non-stop service to my kids (the four of my own and our two international students)—without a bit of gratitude in return. I was burnt out.

And I was fighting mad—not enough to take on anyone out loud and in person, but enough to wage the battle inside my own head. I’d carried it into church. On the third song I felt God poking me, harder and harder, till I ceased my inner tirade enough to listen.

“You know, you’re not in the battle right now,” the Holy Spirit reminded me. “I’ve given you this space and time to regroup and rest, to connect with your life source. And you’re throwing punches like your opponent is still in your face.”

Oh, how often I do that. In moments of peace and quiet, I give into the urge to rehash past things I have perceived as wrongs. It makes me feel right and justified. It puffs me up into a martyr (ach, that mommy-martyr syndrome). I allow myself to think that I am building up ammunition so that one of these days—yes, one of these days—I’ll let it loose and air my grievances, and they’ll be really well-delivered because I’ve practiced them so much in my own head.

But this is the wrong battle.

I’m in a battle, all right—or at least I’m supposed to be.

But it’s not the one I choose to fight so much of the time.

It’s like the enemy is right there—throwing in lightning-fast crosses, catching me off guard with his left hook, jabbing me under the ribs with his knee.

And I’m swinging punches at myself, pummeling my own face, kicking my own shins. I weaken myself and become even more vulnerable to the enemy’s attack.

Because there IS an enemy. And he LOVES it when I fight the wrong battle.

Ever since that morning in church, I’ve been asking God to show me the battles I AM supposed to be fighting.

These battles are not WITHIN but are actually AGAINST my own mind. “(W)e take captive every thought to make it obedient to Christ.” That’s the second half of 2 Corinthians 10:5. The first part of that verse is also applicable. Though it is often used to refer to false philosophies and doctrines, it certainly applies to the false things I tell myself and the wrong perceptions I hold. “We demolish arguments and every pretension that sets itself up against the knowledge of God…”

“For we are not fighting against flesh-and-blood enemies, but against evil rulers and authorities of the unseen world, against mighty powers in this dark world, and against evil spirits in the heavenly places.” Ephesians 6:12 NLT

The enemy is never really my children or my students, my boss or my colleagues, my husband or my friends. The enemy is wholeheartedly focused on one goal: to keep my eyes and my mind OFF of Christ, away from true knowledge of Him and the Father. And this enemy will use whatever weapons work best to accomplish this.

So I DO have a battle to fight. But the one I often get drawn into is a false battle, a decoy, and being in that false battle is a sure sign that I’ve stopped fighting in the real one.

I have to listen closely to my Commander-in-Chief. “Jen, did you really take a look at that thought that just passed through your mind? It was full of self-pity and self-promotion. Don’t give into that thought. Fight it! Wrestle it down. Catch it NOW before it lures you in. Ask Me for help. Cry out to me and keep your eyes fixed on me. I will rescue you.”

I need to pick my battles wisely.

And then, I need to fight them well. 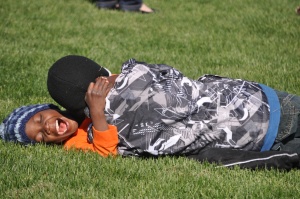 And here’s how it ends (usually)–collapsed in laughter! (There must have been a time-out between the earlier pic and this one, since PJ now has a hat on. Maybe the grass was tickling his head?)