Lots of us got our hair “done” while sitting on the “sideline” of the soccer game.

Four and a half years ago I stood in front of Light the World Church’s several thousand members while Wilfred prayed over me and Patrick and the adoption process. At one point while he prayed, I looked up. Thousands of arms reached toward me and toward heaven, and tears spilled onto my face.

I have never forgotten that moment.

All of us with all of the older Mercy kids.

This morning I stood before Light the World Church again and told them how much their prayers meant to me during that time. Dave and I both thanked them for loving children so much that they are willing to care for so many of them—in particular for the one who became our son.

Anna Lindus with one of the toddlers at the Children’s Village.

I have learned so much from getting to know fellow believers from other cultures. Our God is BIG, and though we must all worship Him in spirit and truth, the different styles preferred by various cultures merely points to yet another facet of our diamond-brilliant God.

Dave offered 10,000 Ugandan shillings (equiv. $4) to anyone who would catch one of the chickens at the Village. Sela took him up on it.

So today we joined together with brothers and sisters in Uganda, at the 5,000-member-strong Light the World Church with its crooning preacher (he’s also a very well-known Gospel singer in Uganda) and dancing choir and its insistence that all we have and are belong to God, so we might as well surrender it and enjoy the ride.

The girls loved it. Anna Sezonov (sorry, Anna, if I’m butchering your name—everyone’s asleep, so I can’t ask anyone how to spell it) shared her testimony in the first service. She did a great, great job—emphasizing the truth that she’s had to trust in God through difficult times.

Wilfred showed Dave all the projects they want to do at the Village (including an extensive garden–already happening) and they came back w/ 2 giant sweet potatoes, which we’ll eat at some point this week!

Wilfred took us on a tour of the church (which was new to me—they had to move from their old location b/c the surrounding ground was too swampy) and told the girls how it was started. Here’s a quick recap: four boys who went through secondary school together accepted Christ. As they began growing in their faith, they began meeting for prayer under a mango tree, and they felt led to start a church. At the same time, homeless children began moving into their 8 by 10 meter shack—simply because the guys were welcoming to them. The church began with a small group and kept growing. The guys rented a larger place, and more children came. Now, ten years later, the “guys” are in their late twenties, Light the World Church is a 5,000 member church with all kinds of ministries in the community, and Mercy Childcare (LtW’s childcare branch) cares for about 100 children. Mercy has a home for its older children (five through 20) and has bought an acre and a half of land and is building a children’s village on it. One home has been completed already, and the babies and toddlers are housed there. We visited both the older kids and the babies yesterday, playing a match with the older ones (and a few village children as well) and rocking babies to sleep. 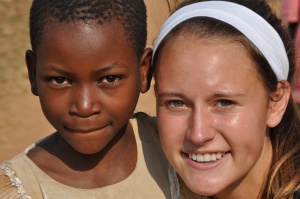 Eaden with a child from Mercy

In the fast falling darkness (dusk is a short-lived event here) we drove home and ate a wonderful dinner that Mama Cici (full name Fluyencia) prepared for us. Wilfred and Vena run their guesthouse with simple hospitality, and the girls are getting a bit of a look at what home life is like—a home that welcomes everybody. 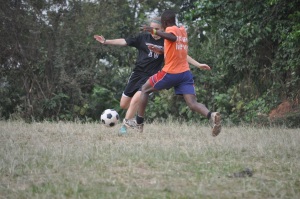 Playing with the boys. This is Sez (Anna S) squaring off with Isaac, one of the older boys helps a lot at both Mercy and at Wilfred and Vena’s house.

Sorry for posting this late (well, early for us). I couldn’t get internet access last night (amazing that we have it all!), so I’m posting this in the morning. We’re heading to the Kutenga slum to play soccer with the kids and visit some homes there, and then we will visit a cancer hospital.

4 thoughts on “Seeing Ugandans Light the World, Day 1 in Uganda”