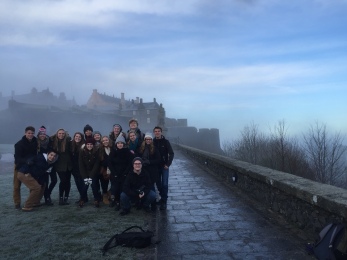 The group outside Stirling Castle

Well, we did see Stirling Castle and the William Wallace monument on Friday, but Billy (named after Wallace himself) was not our guide/driver. Instead, we rode with Graham, who is an excellent guide—full of all kinds of interesting tidbits—but a bit of a speedy driver on the windy Scottish back roads. By the time we finished the day, one of our kids had actually gotten carsick and several others were looking a bit green around the gills. 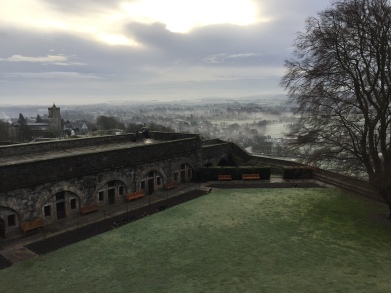 A view from Stirling Castle

But our time outside the bus was quite enjoyable! Stirling Castle has been restored and is staged to look as historians believe it would have at the time of James V of Scotland. We got a look at the medieval-era castle kitchens, the palace with its multiple waiting rooms (for persons of different rank), the Great Hall which once seated 500 for a banquet at which they wheeled in the fish course on a 5-meter long ship complete with brass cannons! 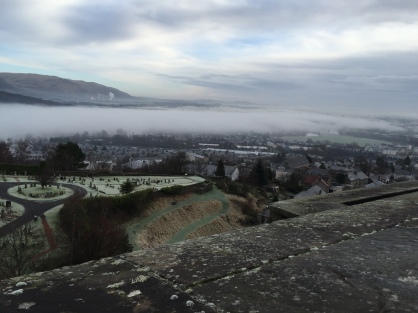 Another view from Stirling Castle

After Stirling we drove to a tiny town named Kilmahog (literally “church of mahog”—so evidently some church leader named Mahog lived there at one time). Kilmahog is home to (among other things) a woolen mill and a GREAT little café where they make everything from scratch and have homemade soups that are delicious and just outside ordinary (like Friday’s choice: tomato cranberry—yum!). It was also home (until fairly recently) to the famous highland cow Hamish. 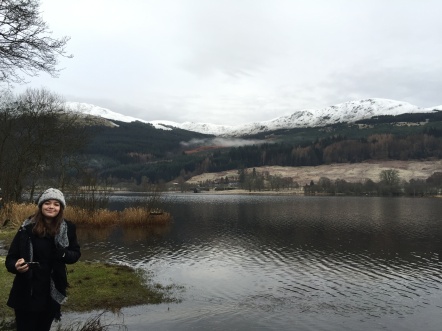 Em in the Highlands

We drove a little ways into the highlands (absolutely beautiful) and then turned around and headed toward the William Wallace monument. We made a quick stop at Doune Castle (where Monty Python and the Holy Grail, Outlanders, and Game of Thrones were all filmed), which was perfect timing for our motion-sickness-prone group member to completely lose her lunch (we told her she shouldn’t be embarrassed; after all, very few people can say they’ve puked at the site where Monty Python was filmed!) and then drove to the William Wallace monument. We climbed up, up, up the steep hill to the base of the monument and then 265 steps to the top of the monument itself. We were grateful that the weather cleared for a bit, so we could see the whole of the town of Stirling laid out below in the valley and Stirling Castle up on the other side of it. We stopped in the historical rooms as we descended. In one of them was a replica of Wallace’s giant sword. He had to have been not only tall but incredibly strong to heft that thing. (The most conservative estimates put him at 6’2”ish, which, since the rest of the Scots in his time hovered around 5½ feet, is comparatively ginormous).

We ate dinner back in Livingston and then spent some group time preparing for the church service on Sunday before heading back to host families and bed.

Saturday we rode the train system into Edinburgh. The Royal Mile in Edinburgh is almost magical in its beauty, but it has dark undertones. The spiritual history of Edinburgh is rich, as we learned when we took the Reformation Tour in the morning. Dave and I consider this particular tour key in teaching the students the Christian history of Scotland and its current spiritual state. It’s run by Christian Heritage of Edinburgh, and it’s excellent. Paul James-Griffiths ends the tour at St. Columba’s Free Church with hot chocolate and his perspective on the the church today in Scotland. His view is supported when you leave St. Columba’s and see the state of so many of the physical churches on the Royal Mile. One hundred years ago these churches were the birthplaces of social, political, and educational reform and scientific and medical discoveries, but now one is a nightclub, another a social club, and another the starting point for a ghost tour.

We gave the kids some free time after lunch (which we ate at The Elephant House, where J.K. Rowling wrote much of Harry Potter), and several of them remarked to us about the dark feel of some areas of the Royal Mile. The bright point, for me at least, was when we visited Queen Margaret’s chapel at the top of the hill at Edinburgh Castle. I’d become fascinated with Margaret the year before when we visited Edinburgh, and I researched and wrote about her when I returned home. (Here’s the link to a piece I wrote about Margaret.) Following dinner at Deacon Brodie’s (named after Deacon Brodie, the respectable-man-by-day-burglar-by-night who provided inspiration for Robert Louis Stevenson’s Dr. Jekyll and Mr. Hyde), we returned to the church to finish getting ready for the Sunday service. We were also able to have a really sweet time of sharing testimonies and prayer before host families picked up the students.

This morning’s church service was wonderful. Our students led worship and shared testimony to God’s work in their lives and worked with the children and really interacted with the church members. There are incredibly few young people in the Church in Scotland, so we were told again and again what an encouragement our young people were.

We had a potluck following church and then some down time and then held a joint service with a youth group only a couple miles down the road. We put them in small groups mixed with both our students and youth group members in each group. One of the questions we asked them to answer was this: What makes it hard for you to follow Christ in your school or home context? Our students talked about how easy it is to get complacent; their students talked about not knowing a single other Christian in their schools. We shared prayer requests in these small groups and worshipped together and shared more testimony. It was a really beautiful time of fellowship, and when it was time to go, our students didn’t want to leave—which was exactly the result we’d prayed for.

After a dinner of fried pizza (or you could get a fried burger!—both ‘ick!’ in my opinion—we sent them back to host families. Tomorrow, very early, we will be at the community high school, leading the first assembly of the new year to 250 students. Please pray for this assembly. Pray that hearts are already prepared, that the word of God falls fresh, that the technology works correctly, that we see and sense the Holy Spirit’s movement, and that God’s love is palpable.