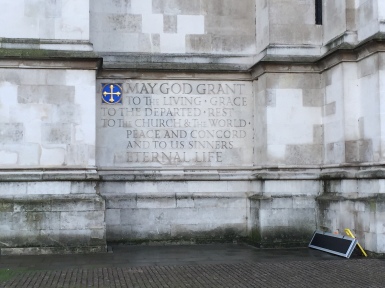 The prayer engraved outside Westminster Abbey

With all sixteen kids! (Not much of an accomplishment, but on last year’s London/Scotland trip, we “lost” a kid the very first day, so I’m grateful!)

Yesterday we began the day with tube travel in peak morning traffic (one Londoner told me the government is considering all kinds of options to decrease tube traffic in the morning—it’s crazy!). Our marvelous tour guide Ruth met us just outside Westminster Abbey and told us one story after another as we walked through the Abbey. The kids kept turning to me and saying, “She’s amazing!” She really is! A good tour guide makes all the difference! 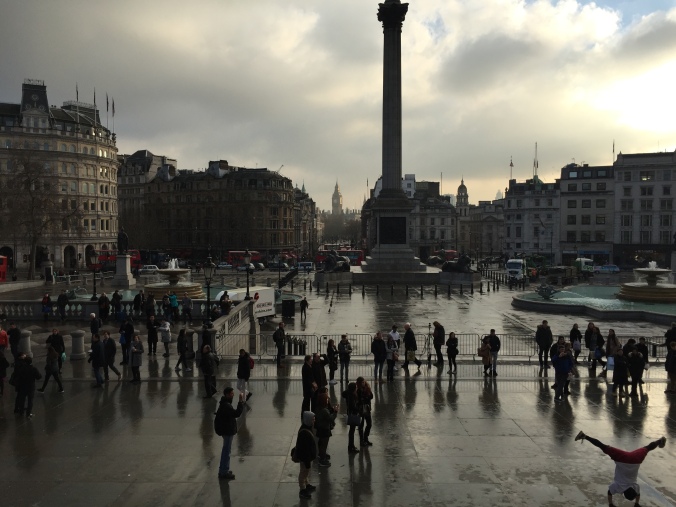 The view of Trafalgar Square from the entrance to the National Art Gallery (see the street performer in the bottom right corner? Fun!)

Highlights for me from Westminster Abbey (if you’re a parent, this will give you talking points with your student):

-Queen Elizabeth’s tomb—where she is buried with her enemy-sister Bloody Queen Mary (the tomb is pretty incredible, but the main point of fascination for me is Ruth’s telling of these sisters’ backgrounds and their father’s craziness!)

-the pause for prayer (Westminster is still a working church)

-Poets’ Corner (and especially Dickens’ memorial—where, following his death, the poor of London came by the hundreds to pay tribute to the man who was sympathetic to their plight and wrote about them as real and valuable people)

-the gothic arches—can you believe that those huge, soaring ceilings were accomplished through trial and error? Incredible.

After Westminster we walked to Buckingham, watched the changing of the guard, learned about the current state of the monarchy from Ruth, a born-and-bred Londoner who loves her queen, and then had lunch and free time at Trafalgar Square. 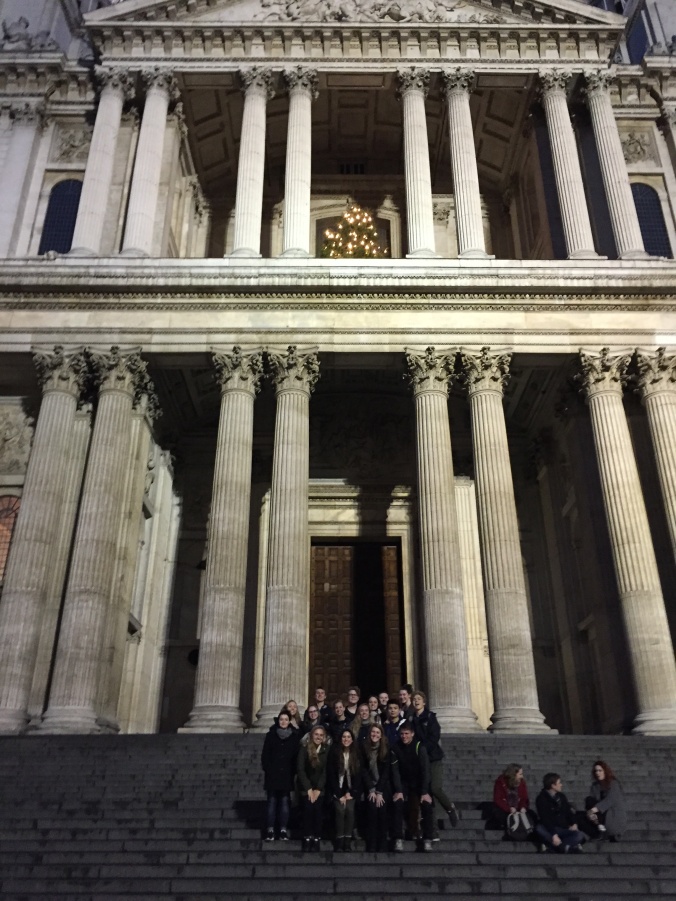 I moved WAY back–still couldn’t fit the entirety of St. Pauls in the shot!

All fun, but the most meaningful part of the day for me was Evensong service at St. Paul’s Cathedral. As an Anglican myself, it had special significance, but even the students unfamiliar with liturgy took something from the service. When you recite the Lord’s Prayer in a place as grand as St. Paul’s, with the great dome rising above, and you remember that the God we worship is so much more majestic and mighty and beautiful as to make the dome seem pitiful in comparison—well, that’s pretty awe-inspiring!

Last night at room check, Dave and I gave the kids a taste of Scotland in the form of Tunnock’s teacakes (about which, by the way, there is currently a bit of a furor [sorry, couldn’t resist the word] because the director of Tunnocks just ran an ad in the London Underground marketing the cakes as “Britain’s” tea cakes rather than Scotland’s. Follow this link to read more!)

This morning, bright and early–correction: “dark and early”–we boarded the train to Edinburgh. Another smooth transition, aided by a very kind rail worker named Simon who saw our huge pile of bags and offered to put it in a secure car at the back of the train because he knew we would have taken it to our carriage only to find it packed so full of passengers there wouldn’t have been room for it. Thank you, Simon!

So now we’re in Scotland, the real heart of this trip, where we will hang out with Scottish teens and spend time in Scottish churches and do, of course, a lot of discovering of this beautiful, rainy, long-historied place. We spent the afternoon in training sessions, learning about the church in Scotland and talking about our faith and how to share it with the Scottish teens we will soon meet. After sessions and dinner, our students went home with their Scottish host families, and Dave and I caught up with Rob and Louise Bell, the missionaries and dear friends who help coordinate this trip.

Tomorrow we’re off to Stirling Castle and the William Wallace Monument. Our driver Billy will tell us all kinds of interesting tidbits about the Scottish hero he and so many other Scottish lads are named for, and we’ll end the day with some work time for the church service we’ll lead on Sunday.

One thought on “last day in London/first in Scotland”