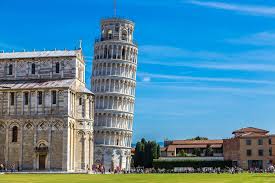 “We believe in one holy catholic and apostolic Church. We acknowledge one baptism for the forgiveness of sins. We look for the resurrection of the dead, and the life of the world to come.” (from the Nicene Creed)

We look for … the life of the world to come. There is, obviously, a future sense to this, a final resolution brought about by Jesus’ return. There is a “not yet,” as our world now is not as it will be when the King has come. Right now our world operates at a tilt. The Cornerstone is present (Mark 12:10-11), but our world is shifted off-kilter, like the leaning tower of Pisa. Since the entire thing is at a slant, we don’t even realize we’ve adjusted to it. It feels natural, but this walking at a slant to the Cornerstone wears on us. We, the holy catholic and apostolic Church, baptized by and in Jesus for the forgiveness of sins, can walk straight NOW, can walk and move and have our very being in the Cornerstone, made straight by the Cornerstone. We’ve been enlivened by the Spirit, moved from death to life. Even though the world around us lives at a slant to eternal reality, we can live eternal reality now—the eternal reality that says love is preeminent, that stuff and accolades and success won’t last, that says love of God and neighbor is the only measure that matters, that values community and mutual submission rather than individual accomplishment, that views all people as made in the image of God… Living eternal life now isn’t easy; everything around us is going to make us feel as if we are the ones walking through life tilted. But Jesus said that when we do what he told us and act on his words—loving our enemies, living with extreme generosity, refraining from judgment and condemnation…–we are like a man who has built his house on a rock (Luke 6:46-49). It’s straight and sturdy, and will not be shaken. Let’s look for and live the life of the world to come.

The many paradoxes of Christianity (Triune God, hypostatic union of Jesus, free will and foreknowledge…) are not as paradoxical as they seem to us. In Trinity Matters, Dancause uses this illustration to picture our limited understanding. Imagine a cone passing through a 2-dimensional world. Though the cone is 3-dimensional, as it passes through this world, it will only be able to viewed as 2-dimensional. If the cone passes through vertically, it will be seen as a circle of varying sizes. But if it passes through on its side, it will be seen as a trying of varying sizes. It will appear to be two completely different things. Yet it is one, fully integrated shape. The issue is not the shape; it is the limited view of those who live in the 2-dimensional world. Same with us and God. The issue is not contradiction within God. The issue is our limited and broken viewpoint.

He writes of is as “’flat’ ways of looking at the same ‘extra dimensional’ thing. The circle and the triangle contradict each other at one level, but on a higher level, as with the example of the cone, they actually define each other as one entity.”

The more I study God and Scripture, the more I realize my world is one little piece on the edge of a vast puzzle that stretches far, far beyond in all directions! This relational, 3-in-one/1-in-3 God extending relationship to all he has created will blow my mind—and my heart—whenever I let him, and I think in Kingdom come I will constantly be saying “Wow!” (location 1958 in Kindle edition)

I confess that I used to think of the Incarnation as the Son being sent off to a horrific kind of boot camp (or worse). It grieved the Father and the Spirit, but it was necessary. I also thought of the Son as experiencing this all alone and thus carrying, for all eternity afterward, this experience and trauma that the Father and Spirit couldn’t identify with. I was definitely believing in some subordination within the Trinity—along with some other unorthodox ideas (maybe tri-theism?).

Karl Barth helps me with this. “Barth describes incarnation as the Son of God’s journey into a far land. …the Son of God effects reconciliation since the journey is that of God himself revealed in the Son. ‘…the Son’s journey is God’s own journey and that the Son’s self-humiliation in birth, life, and death is an expression of God’s transcendence. God is exalted in the humility of the Son.’” (p. 128 of The Doctrine of God by Veli-Matti Karkkainen).

Are there any ways you’ve discovered you’ve thought wrongly about God?