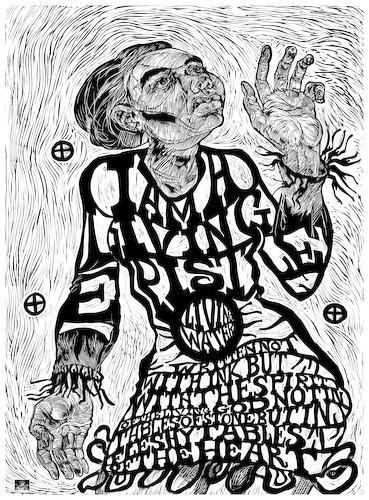 This is a print by artist Steve Prince. You can see and buy his beautiful art (including this piece) HERE.

I just finished taking a 10-week course on the Trinity. Early on in the course, the professor shared that she had recently received a question from one of her former students who is now a pastor. A couple of this pastor’s church’s members told her they’d been discussing the incarnation and had wondered if Jesus was still—right now–in his body. The church members told the pastor they had different viewpoints, but they did agree on one thing: it didn’t really matter that much.

The pastor was reaching out to her former professor for help in getting them to see that, yes, Jesus is right now in his body and, oh yes, it matters a GREAT deal!

I was reminded of that story very recently when I met with a young woman who has been sexual abused multiple times by different men. We were talking about false guilt, the sense that somehow she was at fault for this. “I know I need to reject that,” she said, “I know it’s not true.”

I nodded my head vigorously, and then she said something that made me stop. She said that maybe her body—because of the abuse—was not fit for anything better than abuse. And the way she said this and the way she pointed at her body as she said it gave me a clue. “What’s more important to who you are? I asked her. “Your body or your spirit?”

No hesitation. “My spirit. Of course.”

I went on to tell her that a big reason we know this is because of the incarnation of Jesus—the current incarnation of Jesus—the now-and-forever incarnation of Jesus. He didn’t just put on a shell for a period of 33 years and then shed it like a piece of worn-out luggage upon finishing a long journey. Jesus was and continues to be human, and being human means being a person: body and soul/spirit. He also didn’t get a new, unrecognizable body upon his resurrection, like a caterpillar sheds a cocoon upon becoming a butterfly. He was recognizable and he bore the scars of the wounds inflicted on his body before his death!*

I have found, in listening to women who have been sexually used and abused, that this last truth is SO important. Jesus still bears scars on his resurrected body, and these tell us that all that happens to us—body and spirit/soul is significant. The scars on the resurrected Jesus tell us that God values us as whole persons, that what happens to our bodies matters to God. The abuse of the body is not less significant to him than wounds to our souls (and is there any way to say that any deep wound—physical or emotional—does not affect ALL our being: body-and-spirit?). Jesus’ scars let us know he understands right now that harm done to one’s body is harm done to one’s very person, and it is seen and hated as violence against one of God’s beloveds. But the scars also offer hope, for Jesus’ scars are not signs of defeat but of healing, the healing of the entire world. So, too, can we know that the effects of sin on our bodies—both the visible effects and those hidden—will be transformed.

*NOTE: Not long after I wrote the above, I read a blog post by Mike Frost in which he eloquently wrote about the body of Christ as part of his Lenten blog series in which he is sharing what he is learning from contemplating a painting of the body of the dead Christ by Renaissance artist, Andrea Mantegnacon. I’ve pasted in part of Frost’s blog post below. If you want to read the entire post (I highly recommend it), here’s the link: “you can tell a lot about a society by the way it treats dead bodies.”

“The baffling miracle of the Incarnation is this: not that Christ’s spirit entered a human body, but that God was human in the initial mitosis, with the fusion of gametes, the splitting of cells, the condensing and compacting of chromosomes within the uterus. Christ was fully human from the beginning so that his death was the death of God, not the death of the body he had invaded or used for such a purpose.

So when I contemplate Mantegna’s depiction of Christ in that painting I try to be present to a terrifying concept: God the corpse. For if this corpse is not Christ what kind of death has he died? A proxy death?

Christ was fully human. He experienced all the limitations of human existence. He was captive to bodily needs and functions of being human. And so his death was truly his death, and his corpse is truly his body.

On Easter Sunday we will celebrate Christ’s resurrection, his victory over death, the triumph of grace, the glory of God. And a month later we will celebrate the most baffling miracle of all — the Ascension — in which a piece of this material world, Christ’s body, ascends into the heavenly realm. It’s all too great to imagine.”